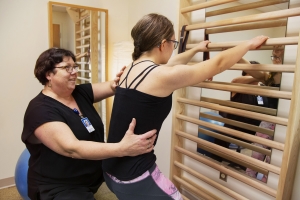 In true Duluth fashion, the Richmonds love being active and outdoors. As a close-knit family of five, they can regularly be found together climbing up a rock wall or skiing down a snowy slope. However, when they found out their oldest daughter Kelila had scoliosis, they began to wonder if she was going to be able to continue doing the things they love as a family.

“I was probably the most nervous,” said Shelley, Kelila’s mom. “I knew scoliosis was something you had for life and that it could be debilitating. I didn’t know what we were going to do.”

To confirm the diagnosis, Kelila’s primary care provider referred the Richmonds to a pediatric orthopedist. “I was preparing myself for Kelila needing a brace, or even surgery,” Shelley said.

After another round of X-rays, they found out she had idiopathic adolescent scoliosis. This develops when, instead of growing straight, the spine begins to curve in an abnormal side-to-side S or C shape during a growth spurt.

Kelila’s scoliosis wasn’t severe enough to require spinal fusion surgery or a brace. Yet, something still needed to be done to treat her abnormal curvature.

It was then that their orthopedist told them about the Schroth Method.

What is the Schroth Method?

Developed in Dresden, Germany during the 1920s, this physical therapy exercise regimen was pioneered by Katharina Schroth. Katharina had been diagnosed with moderate scoliosis at the age of 16 and was undergoing treatment in a steel brace. Before long, she decided to explore another approach to combat her curves.

Katharina experimented with certain positions, movements and breathing techniques that helped to correct her posture over time. Eventually, she established an institute to help others diagnosed with scoliosis. Today the Schroth Method is standard treatment for scoliosis in European countries, but has only become an option for Americans within the past 15 years.

Hopeful and curious to learn more about this treatment option, Shelley and Kelila were referred to the only Schroth-trained specialist north of the Twin Cities: April Gerard, PT, at St. Luke’s Mount Royal Medical Clinic.

Diagnosed with scoliosis at a young age, April found significant pain relief and better mobility using the Schroth Method herself. This experience gave her a passion to help others and the ability to relate to what her patients are going through.

“It was a joy to meet April,” Shelley said. “She’s engaging, warm and she immediately connected with Kelila.”

During their first appointment, April evaluated Kelila’s curve and began to create an individualized exercise regimen for her. Tailored to each patient’s unique curves, the Schroth Method uses stretching, strengthening and breathing techniques to stop curve progression and lessen pain. The therapy can also improve posture, appearance, and lung capacity.

These exercises are done by the patient at home while regularly checking in with April to make sure they are being done correctly. April tends to see her patients more at first and then gradually less as the patient progresses in their ability. The number of sessions with April varies according to individual needs.

To help Kelila remember how to do these exercises at home, April created a folder with pictures, notes and instructions.

“It was very uplifting,” Shelley said. “We left with a lot of anticipation for the future.”

As with any physical therapy, success with the Schroth Method requires commitment and focus. Fully aware of this, Kelila set aside 30 minutes a day, 5 days a week to work on her exercises.

“The most challenging part was remembering how to do the exercises,” Kelila explained. “The first couple times I saw April, I’d go home and be like, ‘okay, what do I do again?’ But once I got used to it, the exercises were easier.”

Kelila saw April once a week at first to make sure she was doing the exercises correctly. As Kelila got stronger, April gave her different exercises.

After a while, Kelila’s hard work began to pay off, and the Richmonds noticed that she looked more balanced. Kelila even saw an improvement in her rock climbing abilities. “I can reach farther when I’m straighter,” Kelila said. “Walking feels more natural now, too.”

Shelley noticed a change in her daughter’s appearance as well. “We’ve taken pictures throughout this whole process,” Shelley said, “and I can definitely see a difference.”

To learn more about the Schroth method from April, call 218.249.8880. A provider referral is required for this service. To establish care with a St. Luke’s primary care provider, call 218.249.4000 or visit www.ChooseStLukes.com.