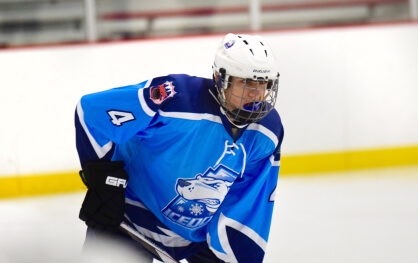 Matthew Dallmann, a true Minnesotan, has been playing hockey since he was five years old. His mother has been cheering in the stands for just as long. At age 17, he plays for the Icedogs Junior Gold Hockey team in Blaine, Minnesota. “Matthew weighs about 140 pounds, which is slim for a hockey player, and he usually avoids being checked because of his speed on the ice,” his mother LaRae said.

This February, during a tournament at Duluth’s Fryberger Arena, Matthew was checked—hard. His body folded over the boards. “He didn’t get up right away, which is unlike him,” said his mother, who witnessed the collision from the stands. “I was probably more worked up than he was. He was sweating so much and his color was off. I knew we had to take him to a hospital.” Matthew, who retained his sense of humor throughout the ordeal, joked, “I don’t think she realized how sweaty I already was from the game.”

Because of LaRae’s instincts telling her that her son was badly injured, the Dallmanns drove to St. Luke’s Hospital Urgent Care. “No hockey mom ever wants to see her child injured, but when Matthew got hurt, I was really glad we ended up at St. Luke’s,” said LaRae. “The staff brought Matthew a wheelchair as we walked in the door, and before we had even finished checking in, the triage nurses brought him back. They immediately began an ultrasound, and when they didn’t find anything, the emergency physician ordered a CT scan right away.”

LaRae’s intuition was right. Matthew had a bruised kidney and a ruptured spleen that needed immediate treatment. Traditionally, surgery would be done to remove the spleen, but St. Luke’s has skilled experts who can provide an alternative using their state-of-the-art hybrid operating room technology. “He is so young, we didn’t want to remove his spleen and subject him to a lifetime of immunizations and antibiotics,” said Dr. Morgan Althoen, the St. Luke’s interventional radiologist who treated Matthew.

Interventional radiology uses imaging, such as CT scans, x-ray and ultrasound, to guide instruments to perform a variety of procedures. In Matthew’s case, Dr. Althoen performed splenic artery embolization to stop Matthew’s internal bleeding. Matthew only needed a small incision in his groin, through which Dr. Althoen inserted a catheter. He then injected small metal coils into the arteries leading to the spleen, blocking some blood flow and controlling the bleeding.

LaRae stated, “Dr. Althoen explained the embolization procedure to me. It was a far more appealing option than surgery. It would have taken weeks to recover from the operation, and without a spleen, Matthew would be susceptible to infections for the rest of his life. The choice was easy.”

“We had an entire interdepartmental team collaborating to take care of Matthew and provide him with the best care possible,” said Dr. Althoen. “The emergency department staff and trauma surgeon who contacted me were on standby, and a team of anesthesiologists jumped in to monitor Matthew’s vital signs throughout the procedure.”

The splenic artery embolization procedure has a high success rate, and Matthew’s was another successful case. “I was so impressed with the procedure. He was done after about 30 minutes,” stated LaRae. The recovery time for the procedure is also quick, usually taking about two days for the incision to heal. “The new hybrid operating room at St. Luke’s, where Matthew’s procedure was done, has been incredibly beneficial for the community,” Dr. Althoen explained. “St. Luke’s hybrid operating room is one of the best in the nation. Because of our state-of-the-art imaging technology, patients at St. Luke’s now have more minimally invasive options that provide better results and faster recovery times.”

Because Matthew’s injury was so severe, he remained at St. Luke’s for nearly a week so his blood levels and overall stability could be monitored. “Our experience at St. Luke’s was wonderful. Everyone we encountered was very concerned for Matthew and conscious of my needs as a mother,” explained LaRae. “The nurses and doctors were all very knowledgeable, and happily answered all of my questions. They even got me blankets and a room, since we are from out of town.”

Thanks to the treatment he received, Matthew was able to go back to his daily activities like school relatively quickly. His spleen will continue to heal for a longer period, and he will not be able to play contact sports until next year.

Matthew’s spirits, however, do not seem dampened by the news. “I’m a senior this year,” he said. “I am going to college next year anyway and want to focus on my school work before deciding how much hockey I will play in the future.”