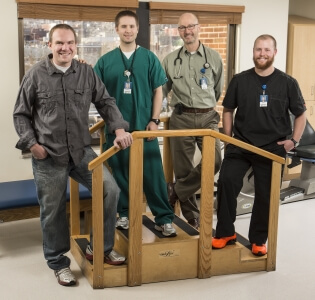 It takes a team

It was one of those odd spring days in northern Minnesota in late-April, 2014. Despite the date on the calendar, a cold front had deposited a layer of ice on the roads. Still, Adam Roen was making good time on his way to pick up his six-year-old daughter for a special daddy-daughter dance. His trip, however, was interrupted when he came upon a car that had lost control on the ice and came to rest, upside down, in the median strip of the highway.

“I pulled over and discovered that a grandma and her four-year-old grandson were trapped in the car,” said Adam. After helping to free the two, as Adam was carrying the young boy to safety, another vehicle lost control on the ice and came barreling into the median.

“I have no memory of what happened,” said Adam, “but apparently I tossed the kid to safety right before the truck hit me.” The truck ran over Adam, pinning him under the exhaust.

Thus began an epic struggle for Adam. After being extricated from the wreckage and taken to St. Luke’s Regional Trauma Center, Adam was stabilized. He had a shattered leg, a broken arm, a crushed pelvis and a lacerated artery. “It took four surgeries to knit me back together,” said Adam.

But the surgical repair was only the beginning. Adam’s journey soon moved to St. Luke’s Inpatient Rehabilitation Unit and the care of Dr. Samuel Laney and the team of rehabilitation experts.

“Inpatient rehab is for the most serious cases, like Adam’s,” said Dr. Laney. “The objective of every person on our team is to help our patients reach their rehabilitation goal, and to journey with them through that process.”

For Adam, whose devastating injuries and resulting surgeries left him weakened and unable to move, his goal was as simple as it was audacious: “I told them: I want to be home to celebrate with my family by the Fourth of July.”

Every day, Adam’s St. Luke’s team, including physical and occupational therapists, a psychologist, social worker, nurses and physicians, worked with Adam, at first stretching and flexing his arms and legs, then working into more involved rehabilitation. “It was all about small victories,” said Adam. “You have to realize that I couldn’t do anything on my own—put on a shirt, sit up in bed, anything. The therapists would come in, for hours every day, and patiently work with me and encourage me to do even the simplest tasks.”

Said Dr. Laney, “The team spends so much time with each patient that they are able to pick up on even the smallest differences and progress that the patient is making, day after day. It’s important to recognize and celebrate those small victories.”

Adam recalled a particularly big accomplishment: putting on his shorts. “I mean, how mundane, but just being able to pull on my own shorts took a tremendous amount of effort, but the minute I did it, it seemed like the whole rehab unit knew about it.” Team members stopped by to congratulate Adam.

“Sometimes, when I tell people what I do, they say, ‘Wow, that must be depressing,’” said Dr. Laney. “But our team is just relentlessly optimistic. Every day, we see the strength of the human spirit. We get energy from our patients. They have the hardest job. We get a chance to bond with them, and together we work incredibly hard to help and encourage our patients to reach their rehabilitation goals.”

And so, as a result of a huge team effort, Adam left St. Luke’s Inpatient Rehabilitation Unit and went home—on June 30th, three days ahead of his goal.

Said Dr. Laney, “We get to really know our patients, and that’s what we like about rehab. You get a chance to see the impact of your care decisions and can optimize their care and see the results of that care. You really form a bond with your patients. In fact, many of our former patients will stop back and say ‘Hi.’ It is extremely gratifying to see former patients, who have been through so much, returning to everyday life.”

For Adam, his return happened in early November, only five months after leaving the rehabilitation unit. “Just walking back on the unit, it all came flooding back. It was really interesting to see care from this viewpoint—everyone (staff) is moving with such purpose and speed, yet when they entered a patient’s room, they visibly slowed down and focused all their energy and attention on the patient. I remembered what that focus felt like to me as a patient.”

And a footnote to the story: “Some friends organized a benefit for me, and hundreds of friends and family showed up. But then I was introduced to someone I didn’t recognize: his name was Cameron.”

The 4 year-old boy that Adam threw out of the way of the careening truck.

“That was an emotional moment,” said Adam. “I wouldn’t wish this on anyone. But that day, it seems like there was a plan, and I had a role to play in it.”