Ten years after his first open heart surgery, Larry Dagel’s cardiovascular health was beginning to decline again. “I just didn’t have power anymore, and I was always out of breath,” he said. Then in May of 2019, he had to be hospitalized.

“I was coming back from the garage and just didn’t make it,” explained Larry. “I blacked out, fell and broke my hip.” Larry came to St. Luke’s and ended up needing a hip replacement. During his recovery, Dr. Scott Mikesell, Larry’s cardiologist at St. Luke’s Cardiology Associates, looked into what was causing Larry’s fainting and shortness of breath. After performing an ultrasound of the heart, a narrowing aortic valve was identified as the culprit.

Traditionally the treatment for this condition has been aortic valve replacement through open heart surgery. However, as Larry had previously undergone a heart bypass surgery, another open heart surgery for Larry was going to put his health at significant risk. Fortunately, St. Luke’s offers Transcatheter Aortic Valve Replacement (TAVR).

A minimally invasive procedure
“For some people, open heart surgery just isn’t in their best interest,” explained Dr. Mikesell, “Especially for elderly patients who tend to be sicker or have significant comorbidities. For these patients, the TAVR procedure is a much better option.” This is due to the less-invasive nature of the procedure. 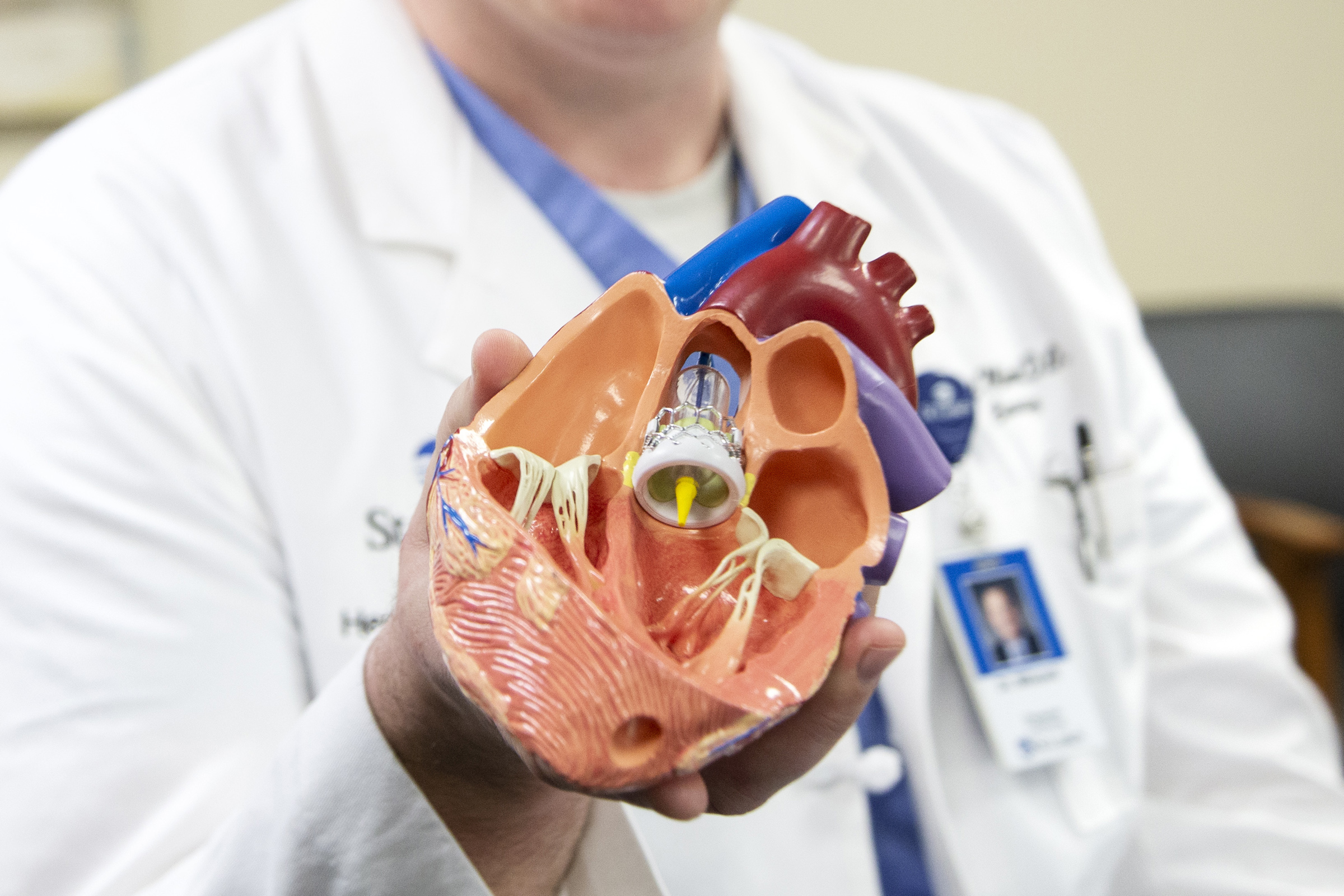 Dr. Mikesell described TAVR to Larry using a model heart and replacement valve. He explained that a catheter would be used to get the replacement valve where it needed to be. When Larry saw how large the valve was, he was surprised. “I asked Dr. Mikesell: How do you get that in there like that?” said Larry. “And he told me, ‘That’s not the way it looks when it goes in.’”

During the TAVR procedure, a catheter is inserted into the femoral artery in the groin or axillary artery in the upper chest through a small incision. Using X-ray to guide the process, this catheter is then used to place a crimped replacement valve across the patient’s native valve. Once the replacement valve is in the right spot, it is expanded and takes the place of the native valve.

“We generally don’t have to perform surgery or give general anesthesia,” Dr. Mikesell said. “Recovery is much less intensive than it is for open heart surgery and many patients go home the next day.”

Addressing Larry’s potential risks
After Larry was onboard with having the procedure, Dr. Mikesell’s team started running tests to get all the information they needed. “There are risks with any procedure,” explained Dr. Mikesell. “During the preparation for TAVR, the testing we do allows us to minimize those risks as much as possible.” Two specific aspects they focus on are the size of the replacement valve and the entry point of the catheter.

Due to the condition of his heart, Larry’s case carried some additional dangers. “He was a little on the riskier side because of his coronary disease and weakened heart function,” said Dr. Mikesell.

However, Larry trusted his cardiologist and wanted to move forward. “Dr. Mikesell explained the good, the bad and the ugly about the procedure to me,” said Larry, “I wasn’t that nervous about it. I’ve been a patient at St. Luke’s for nearly 30 years, and they’ve been really good to me. Besides, I knew something had to be done.”

The first Monday in December Larry went into surgery at 6 am. Everything went as planned, and he woke up a few hours later. Around noon the following Wednesday, Larry was able to go home. Compared to his open heart surgery, Larry thought the TAVR procedure was a walk in the park. “This was nothing,” he said. “It was just like having an angiogram. There wasn’t even any real pain to it.”

Now, Larry is able to do all the things he loves once again. “He’s done wonderfully well,” Dr. Mikesell said. “He’s been telling our team that he’s got a new lease on life. Cases like Larry’s are one of the most rewarding parts of my job.”

Larry couldn’t be happier. “Before, I couldn’t do much at all,” he said. “I couldn’t even make it up and down the stairs without stopping half way. Now I’m feeling much better. I can actually do the things I want to.”

Dr. Mikesell is proud to be a part of a healthcare system that offers procedures like TAVR to patients. “Providing state-of-the-art procedures at St. Luke’s keeps our patients closer to home and within their healthcare system,” he said. “You can’t ask for more, really.”

This article was published in the Woman Today magazine April 2020 issue.