Finding the Courage to Change: Local actor shares his health story to help others 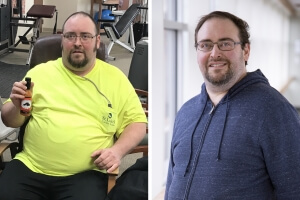 Everyone knows what it’s like to put something off. However, when left unchecked, something small can become a huge problem. This is especially true when it comes to your health.

Local actor Jody Kujawa found this out first-hand after he was diagnosed with congestive heart failure in 2016. This diagnosis gave him the courage he needed to address his failing health, make the necessary changes and lose 80 pounds.

However, before he was diagnosed, Jody’s symptoms were getting harder to ignore.

“I had just gotten used to being miserable all the time,” Kujawa said as he described his life before the drastic change. Living on a steady diet of processed foods, coffee by the pot-full and minimal exercise, Jody knew his health wasn’t what it should be. He knew there were changes he could make, but never thought too much about actually addressing the issue.

“It’s so easy to put things off,” Jody said. “I think we all know when we’re not okay, but change can be a really intimidating thing.”

It was while he was playing the lead role in The Whale at a local theater that he began to feel even worse. Ironically, the character he was playing had congestive heart failure. Jody noticed that breathing was becoming more and more difficult and he was tired all the time. He reasoned that it had something to do with him impersonating a man with a serious disease on stage. The play ended, but his symptoms did not.

Eventually, Jody knew it was time to seek medical attention. Without a primary care provider established, he began the process of finding one. However, he never made it to his first appointment.

“It got to a point where I felt really out of it,” Jody said. “Everything was foggy and I knew something was wrong with me. So, I went into St. Luke’s Urgent Care.” After finding out that his blood pressure was an alarming 267/180, Jody was immediately hospitalized. Surrounded by a team of concerned doctors and nurses, Jody was diagnosed with congestive heart failure.

“When I met Jody he was at a crossroads,” said Dr. Brian Capps, the physician who would become Jody’s primary care provider. “We talked at length about the path he was on and what would have to change if he was going to see his older years.”

This was just the encouragement Jody needed to undergo a serious transformation.

After being discharged from the hospital, St. Luke’s Cardiac Rehabilitation Program was Jody’s first step towards getting better. This program is made up of three parts: monitored exercise, educational classes and meetings with a psychologist to align mental and physical healing. He learned what a healthy lifestyle entails and began to apply it.

“St. Luke’s Cardiac Rehab helped me realize that I was way off as far as health goes,” said Kujawa. “For example, you’re only supposed to eat 2,000 calories a day and I was probably eating around 10,000.”

Jody started exercising, paying attention to nutrition labels and cut as much salt out of his diet as possible. He established Dr. Capps as his primary care provider and checked-in regularly for guidance along the way. After a few months of rewarding progress, Kujawa’s doctor was impressed. Jody’s heart had almost returned to normal.

“I was so excited for him,” said Dr. Capps. “He’s as healthy now as he has ever been his life. He’s reversed his heart failure and gone off almost all of his medications. It’s a change you don’t get to see all the time.”

Jody’s main advice to someone facing a health concern like his: “Get down and address it. Otherwise, you could hit a point where it’s too late, like I almost did.”

Small, consistent changes were key to Jody’s success. Instead of changing everything all at once, he would take one step in the right direction, get used to that and then move on to the next one. This way, he never got too overwhelmed or discouraged to keep moving forward.

Knowing where to start can be difficult. Kujawa suggests checking in with your primary health provider as a wise first step for addressing any nagging health concern you may have.

“If I had been seeing a doctor regularly I would have been more aware of my situation,” Jody explained. “They can give you a baseline of where you should be and help you along when you need to make a change.”