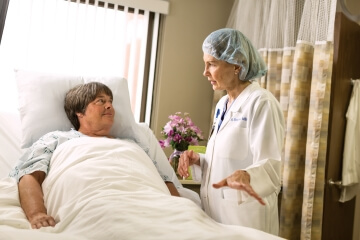 “Every patient has a story,” said Dr. Mary Boylan as she considered the thousands of hearts she’s operated on in the past 23 years. As St. Luke’s first on-staff cardiothoracic surgeon, she has been a driving force within St. Luke’s Regional Heart & Vascular Center, helping reach a milestone of 2,500 open-heart surgeries.

Throughout her career, Dr. Boylan has aimed to keep the patient at the center of all she does. “I think one of the best ways to put the patient above all else is to know their personal story,” Dr. Boylan explained, “then I can really understand how to help them get better.”

Originally from southern Minnesota, Dr. Boylan completed most of her education on the East Coast and in Chicago. During this time, she was involved in hundreds of cases.

“When you’re in the middle of residency, it seems endless,” Dr. Boylan said. “You're always exhausted and constantly running.” However, her ever-increasing passion for medicine and interest in each individual case fueled her to finish.

When she came to St. Luke’s in 2003, she was looking for a place where she could give each person the individual attention they needed to get well.

“I saw working for St. Luke's as a great opportunity,” Dr. Boylan said. “It’s a close-knit community and our patients know they're not just another person in a bed.” Over the years each patient has brought a unique story, and Dr. Boylan has been glad to play a part in their care.

One of these patients was Duluth-native Mike McGivern. After feeling light-headed, Mike went in to see his primary care provider. He was referred to a cardiologist and then scheduled for an angiogram. This procedure revealed that Mike’s heart needed triple bypass surgery.

“I just about flipped when I heard that,” Mike’s wife Gail said. “That sounded awful to me and I was just sick about it, but Dr. Boylan talked me through it and calmed me down.”

With three of Mike’s arteries blocked 80 to 90%, Mike’s heart needed attention immediately. Mike was scheduled for his triple bypass surgery with Dr. Boylan on a Tuesday in October, 2018. After a successful surgery, he spent a day in the Intensive Care unit, and was then moved to Cardiac Care.

As with any open-heart surgery, a triple bypass carries the risk of complications. Mike wasn’t immune to these. Shortly after he was moved to Cardiac Care, he went into cardiac arrest.

The McGiverns will be forever grateful that Dr. Boylan was there to revive Mike. She remained by his side as he recovered and made sure he received the care he needed.

“She talked to me straight and I was thankful for that,” Mike said. “She made sure I understood the plan moving forward and was always so sincere.” After Mike had a pacemaker put in, he and Gail were able to leave the hospital.

“We really feel like we’ve become friends with her,” Gail said gratefully. “We love Dr. Boylan and it seems like everybody else that knows her loves her too.” Dr. Boylan’s chapter in the McGivern’s story may have ended, but it won’t be forgotten by either party.

“People become very dear to me,” Dr. Boylan explained. “Many go into medicine because they want to help someone. I was fortunate enough to find medicine to be that and so much more.”

The stories that lay ahead

As Dr. Boylan continues to play a part in each of her patient’s stories, she refuses to see herself as the only hero.

“No one person does anything worthwhile all by themselves,” Dr. Boylan explained. “I need my team. That includes everybody at St. Luke’s.” From surgeons to housekeepers, Dr. Boylan believes that each person has a unique, irreplaceable role to play.

After 2,500 open-heart surgeries and counting, Dr. Boylan is excited for the stories that lay ahead.

“I’ve seen St. Luke's grow from a hospital to a health system,” she explained. “We’ve come a long way. That said, there's always room for growth, and I think we have a bright future ahead of us.”