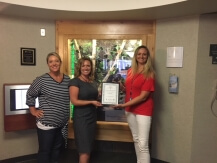 St. Luke’s took part in a national campaign sponsored by the U.S. Department of Health and Human Services’ Health Resources and Services Administration (HRSA). The campaign has added more than 443,000 donor enrollments to state registries since its inception in 2011.

St. Luke’s conducted awareness and registry campaigns to educate staff, patients, visitors and community members about the critical need for organ, eye and tissue donors. Doing so increased the number of potential donors on the state’s donor registry. The hospital earned points for each activity implemented between October 2017 and April 2018 and was awarded platinum recognition through the HRSA Workplace Partnership for Life Hospital Campaign. Of the more than 1,200 hospitals and transplant centers participating in the campaign only 450 earned platinum awards.