The power of positivity: St. Luke’s patient stays positive during a difficult diagnosis 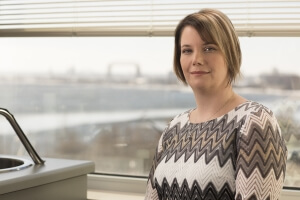 The Power of Positivity

Anyone who has faced an illness knows that healing doesn't just take the expertise and tools of health care professionals. Healing also requires the positivity and strength of the human spirit. Perhaps no one knows this more than kidney cancer survivor Julie King. In 2017, King rose to the challenge that kidney cancer presented, undergoing several surgeries and enduring treatment with a positive outlook. She credits this attitude for playing a big role in her successful treatment, which began soon after diagnosis.

It all started in King’s abdomen; something felt off. King had dealt with issues like this before but this pain was different. She feared it was her gallbladder and headed to St. Luke’s Emergency Department. Upon arrival, she was scheduled for an MRI to determine the cause. After the scan, her doctor explained that they had found problems in her gallbladder that needed to be addressed, but they had found something even more serious: a small spot on her kidney. After further investigation, her doctor confirmed her fears. King was diagnosed with kidney cancer.

Despite this turn of events, King saw the positive in that day. “It turned out that my gallbladder problems were a blessing in disguise,” said King. “Without the MRI, who knows when I would have discovered the cancer?”

According to the National Cancer Institute, kidney cancer is among the most common cancers in the United States. Generally speaking, the quicker the cancer is spotted, the better the outcome. Thanks to higher quality scanning equipment, detecting cancer and other ailments earlier is becoming easier.

After explaining her diagnosis, King’s urologist, Dr. Elizabeth Johnson of St. Luke’s Urology Associates, walked her through the possible treatment options. There are two typical surgical options when it comes to kidney cancer. The first is nephrectomy, where the entire kidney is removed. The second is a partial nephrectomy, where only the tumor and surrounding tissue are removed. Fortunately, most people can live long, productive lives with only one kidney.

“Dr. Johnson and I discussed the possible treatment options at length,” stated King. “She was wonderful, she went above and beyond. She was my doctor, my cheerleader, the whole works.”

Surgery was next. Dr. Johnson and her team performed a radical nephrectomy surgery, where one kidney and some surrounding tissue were extracted. The goal: to stop the cancer before it spreads.

The operation was a success. After a few days recovering in the hospital, King returned home. Through it all, King found reasons to be grateful and to keep moving forward.

“The doctors did their part. Now it’s my turn to do mine.” King said. “That meant having a good outlook on this whole experience. As bad as it was, I really felt like my doctors were invested in my care and would get me through.”

Her physician, Dr. Jake Powell of St. Luke’s Internal Medicine Associates, stopped by her room every day during her recovery to check in, along with Dr. Johnson. “I couldn’t have done it without having the best people in my life, my family — and the doctors at St. Luke’s.”

Post-surgery, King continues her positivity. When she developed new food allergies, she decided to start following a plant-based diet. She also harvests her own honey and is building a new home in Saginaw. The only ongoing care she receives is her visit to St. Luke’s every few months for follow-up MRIs. She has undergone surgery on her gallbladder and had a tumor removed from her thyroid. Despite all her life changes, one thing hasn’t changed: her strong spirit.

“You really have to believe in the greater good of it all,” explained King. “Life never gives you more than you can handle.”