Nothing Is Ever Impossible: Reese Stariha Discovers His Inner Strength at St Luke’s 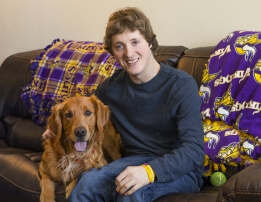 Nothing Is Ever Impossible

The day after Thanksgiving in 2016, Reese Stariha scratched his golden retriever, Goldy, between the ears and headed out to join his friends for a hunting trip. After a beautiful day outside, they headed back to town. That’s when his life changed forever.

Stariha was riding as a passenger when his friend lost control of the truck and it rolled. Stariha was thrown from the vehicle. He was taken by ambulance to St. Luke’s Regional Trauma Center.

When Stariha arrived, he was assessed by a team of St. Luke’s doctors, including Neurosurgeon Dr. John Styliaras. He reviewed Stariha’s MRI and discovered that pieces of Stariha’s neck bone had broken off and the bone fragments had partially severed his spinal cord. The broken fragments were putting additional pressure on his spine, causing further damage.

Dr. Styliaras diagnosed Stariha with an A-level injury according to the American Spinal Injury Association (ASIA) scale, meaning that there was not any function below the injury site. Only 20% of patients recover function after an A-level injury. While sharing the diagnosis with Stariha and his family, Dr. Styliaras had the difficult responsibility of explaining Stariha’s future prognosis: He may never walk again.

While in surgery, Dr. Styliaras and his team removed a disc and the bone fragments that were putting pressure on Stariha’s spinal cord. The team then fused his neck bones with screws and rods to provide stability.

The procedure was successful, and Dr. Styliaras continued to monitor and encourage Stariha as he started his recovery, sometimes checking in multiple times a day. Stariha appreciated the relationship he built with Dr. Styliaras. “He was great! It was good to see him. He was a good guy to have there.”

In the following weeks, Stariha underwent two additional surgeries: a tracheotomy to help his breathing and a procedure to address his broken femur where they inserted a rod from his knee to his hip. St. Luke’s staff continued to support him and his family. “They were tremendous. From the doctors to the nursing staff. They made it easier for my friends and family. I was thankful I went there.”

Stariha spent about a month at St. Luke’s before transferring to other specialists across the Midwest. His path to recovery felt slow, but he was encouraged by the progress that his family and friends witnessed. “Every time my family came back, they would give me feedback on my progress. They could see that I was getting better and their encouragement gave me more energy. I was determined to show them that I’d be back on my feet in no time.”

Stariha also found encouragement in his hometown of Superior. In February, two months after his accident, friends held a benefit in his honor during a Superior Amateur Hockey Association game. He watched the outpouring of support from his hospital bed. “It brought tears to my eyes to see the community turn out for me. It made things much, much easier.”

A Bright Road Ahead

Over the past year, due to his determination and positive attitude, Stariha has reached many important milestones. He regained the use of his legs and on Father's Day in 2017, he took his first five steps. “It gave me a little more hope,” he said. “From my initial prognosis, I would have never thought I’d be where I’m at. I’m still healing and getting stronger every day.”

“I credit Stariha and his family for his recovery,” Dr. Styliaras said about his patient’s remarkable progress. “He's getting through this because of his incredible determination, stamina and work ethic, and also because of the support and love from his family.”

Stariha acknowledges that some days have been good — and some have been hard. Despite the difficult days, he won’t let anything stand in the way of his goals, including living independently with Goldy. “I want to try to get back to my old life and how it was before the accident.”

Stariha has come a long way and his determination is stronger than ever. “I keep working hard at it,” he said. “Because nothing is ever impossible.”