Life of Heather Miller Saved by Her St. Luke's Colleagues 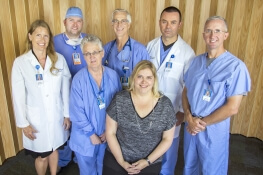 St. Luke’s nurse Heather Miller never expected to be a critical patient in the hospital where she works. Today, she credits her medical team -her colleagues - for literally bringing her back to life.

A busy mom with three young kids, Heather always said she didn’t have time to be sick.

After having a routine hysterectomy on May 12, 2016, she wouldn’t allow herself more than a few days to recuperate before she jumped full tilt back into her hectic life.

Four days after the procedure, Heather was already back coaching t-ball. When she began having shortness of breath after exertion, she ignored it, chalking it up to post-op tiredness and low hemoglobin.

As an RN, Heather admits that medical professionals are often the worst patients. “They are used to ignoring symptoms in themselves and to just keep going,” she says.

On the night of May 25, 2016, however, Heather could no longer insist that nothing was wrong. She had given the kids their baths, put them to bed and, all of a sudden, began having excruciating chest pain.

“It was the worst pain I have ever had, and I thought I was going to pass out. I had this feeling of impending doom, and all I could think was ‘oh, my God, I am going to die,’” she says.

“I told my husband, ‘Call 911.’ And I joked, ‘I hope you know CPR.’ I was having trouble breathing, and I just knew I had a pulmonary embolism, blood clots that were blocking the arteries to my lungs.” A pulmonary embolus is a rare but possible complication after surgery.

Heather, who lives in Iron River, Wisconsin, needed first to be shuttled by the Iron River ambulance and then be transferred to a Gold Cross ambulance as they got closer to Duluth. Over an hour later, when she arrived at St. Luke’s Hospital, the attending physician, Dr. Jonathan Shultz, was the first to treat her.

Knowing that her symptoms and her recent surgery suggested a pulmonary embolism, Dr. Shultz put her on heparin, a drug designed to prevent blood from clotting. He also ordered a CT scan of her chest that confirmed she did have multiple clots, including a saddle pulmonary embolism which most people do not survive.

The internist on call that night, Dr. Daniel Opheim, admitted Heather to intensive care to monitor her condition and see if her body would start dissolving clots on its own. Then pulmonologist Dr. Vance Bachelder and interventional radiologist Dr. Morgan Althoen were brought in on Heather’s case.

When Heather’s condition worsened overnight, the team decided that surgery was needed. “When there are lots of clots in the lungs, as in Heather’s case, the heart can no longer move blood through them,” says Dr. Althoen.

Making a minimally invasive (less than quarter-inch) incision in her leg, Dr. Althoen was able to use some newer technology, a mechanical thrombectomy system at St. Luke’s, to clear Heather’s massive pulmonary embolism.

Dr. Althoen says catheters are inserted through the incision and threaded to the heart and to the pulmonary arteries. “We then use a vacuum device to fragment and suck out the clots,” he says.

Through the long touch-and-go surgery, Heather’s heart gave out three times, causing her blood pressure to drop to dangerous levels. Anesthesiologist Dr. Norman Boucher had to keep reviving her each time her blood pressure dropped along with her oxygen saturation, allowing Dr. Althoen to complete the procedure.

Dr. Althoen notes having this technology at St. Luke’s was crucial. He says, “Heather would certainly not have survived without it.”

With her condition stabilized, Heather was unconscious and on a ventilator for five days following the surgery. When she awoke and could start to talk, she began relating her near death experience.

She recalls, “I saw what I knew was heaven. I was moving down a dark hallway and had a feeling of euphoria. I went in close twice, but each time I pushed away. The third time I had decided to go in, but then I couldn’t, and things went dark.”

“After I was awake, I told my husband that I had seen the light three times, and he told me that my heart had stopped three times.” She adds, “I have since had talks with those who have lost loved ones, and I tell them how comforting it was and how there was no more pain.”

Heather has been so touched by this experience that she is working on a book to share with others what happened to her. She also gave an emotional talk about her experience to a group of young moms at a Hermantown church.

Heather, who is back to work as a nurse in St. Luke’s Surgical and Procedural Care, says she is very thankful for her husband Glen and both their families for pitching in and helping as she has been recuperating.

“I am also so grateful to my team at St. Luke’s: Dr. Shultz, Dr. Bachelder, Dr. Althoen, Dr. Boucher, Dr. Elisabeth Revoir, all the nurses and my CRNA Nate Palm for saving my life and taking care of me,” she says.

It has been a long road to recovery, but Heather has a whole different outlook on life after this experience.

She says, “I am more empathetic with patients now. I try to really listen to what they are saying. And I have realized life is short and we shouldn’t take things for granted. We all get caught up in working and making money. What is important is family.”