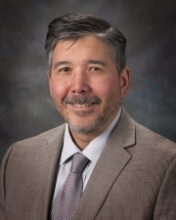 St. Luke’s is pleased to announce that Michael Boeselager has been promoted to St. Luke’s Vice President of Support Services.

Boeselager completed his bachelor of arts in organizational management from Concordia University in St. Paul, MN, and his master of science in health administration from the University of St. Francis in Joliet, IL. He joined St. Luke’s in 2006 as Director of Materials Management. In 2014, he also became Director of Hospitality Services. As Director, he’s been responsible for supply chain management, environmental services and nutrition services.

St. Luke’s President and CEO, John Strange says Boeselager has the skills that will make him a great vice president. “Mike’s a bright, hardworking and dedicated leader. We are fortunate to have him on the team.” He added, “His knowledge of the St. Luke’s health care system makes him perfect for the role.”

Boeselager replaces Ron Franzen who retired and served St. Luke’s in the role since 1995.