It's a Woman's World 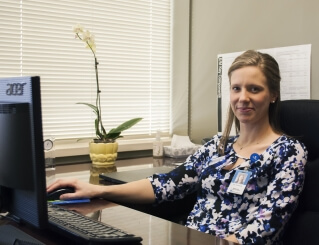 Published in The Woman Today, June/July 2015

It's a Woman's World

Dr. Johnson is something of a rarity.

In a medical specialty with over 90 percent male physicians, Dr. Johnson has something that is fairly unique in the field. Her name.

Elizabeth Johnson, MD, is a urologist at St. Luke’s, and the only female urologist in the Duluth area.

Growing up in Cannon Falls, MN, she felt the pull of the medical field early. Once she arrived in med school, she confessed, “I really wasn’t interested in urology. Most med students didn’t really know what urology even entailed.”

As she was exposed to various specialties throughout her med school rotations, urology began to stand out as a discipline that appealed to her. “Urology is a unique mix of surgical and clinical work. I saw that the urologists I was working with were performing surgeries that made a real quality of life difference, and also had that continuity of caring for many of the same patients year after year.”

Dr. Johnson’s presence in the field of urology mirrors a national trend in medicine toward female practitioners. A major factor in this gender migration is consumer demand: according to the U.S. Department of Labor, women make 80 percent of the health care decisions in America. As health care consumers have become more educated, they have also become more empowered to choose their physicians. And in many cases, female patients are requesting female physicians.

Consumer preference has completely changed the dynamic in many medical specialties, such as OB/GYN. As recently as ten years ago, the ratio of male/female residents was about even. However, as female patients became more empowered, the question ‘Do you have a female doctor?’ became a common refrain to office receptionists. The result? Today, the number of female OB/GYN residents is over 80 percent female—and rising.

Dr. Johnson’s husband, Dr. Andrew Nisbet, is also a urologist at St. Luke’s. In their field, Dr. Johnson joked, “There’s never a line for the ladies’ room at our national conferences.” That trend is beginning to change, as more and more women are being drawn into the field. Again, part of this shift is being driven by consumer demand. After years of relative silence on female urological issues, the amount of information that’s available to women is creating a more-open dialogue with their physicians.

“In urology, male issues such as prostate and E.D. concerns are issues that are fairly popular topics,” said Dr. Johnson. “But what many women don’t realize is how common female urological issues, like incontinence, are.” For instance, Dr. Johnson cited a statistic that after childbirth, one in three women will experience some form of incontinence. “More and more, women are asking their doctors ‘is this normal?’, rather than feeling like they have to deal with the issues in silence,” she said. As women gain more information, they become more empowered to seek a medical solution. “The first thing I tell women who are concerned about incontinence is that one, it’s normal and two, there’s help.”

While being a woman in a male-dominated profession, Dr. Johnson enjoys working with all of her patients, female and male. At St. Luke’s, she gets the chance to perform leading edge robotically assisted surgeries. “The most common robot-assisted surgeries I perform are the prostatectomy or kidney surgeries, usually performed for cancers. St. Luke’s has invested in a robotic surgery system that enables us to do these surgeries with much smaller incisions, fewer side effects, and shorter hospital stays.”

Above all, if there was one message Dr. Johnson could share with anyone concerned about a urological issue, it’s this: “Talk to your doctor. You don’t have to be embarrassed or feel like you are alone. We can help you with treatment solutions that will make a real difference in your quality of life.”