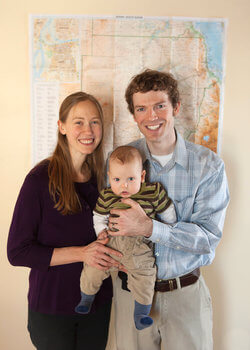 The summer of 2011 was a busy one for Matthew Horning, MD, primary care physician at St. Luke's Chequamegon Clinic. He was finishing his medical residency in Duluth and planning to marry a fellow physician, Monica Lee, MD, in August. He also decided to work abroad with Doctors Without Borders/Médecins Sans Frontières (MSF). Doctors Without Borders delivers emergency medical assistance to people around the world who are affected by armed conflict, epidemics, malnutrition, natural disasters or exclusion from health care. "They had a strong reputation for doing good work and going where other agencies wouldn't go," says Dr. Horning. He sent in his application, and in May of 2012, he got the call to go to a refugee camp in Yida (pronounced Yee-da), in South Sudan.

The Journey to South Sudan

Since it became a country on July 9, 2011, the Republic of South Sudan has experienced violent conflicts that have displaced 300,000 people. It's an inhospitable land with scarce water during the dry season, and it becomes a flood plain during the rainy season. The refugee camp's population had quadrupled to 60,000 people between January and July. "Doctors Without Borders sends you all the information they have on the country and weekly reports on patients, the hospital, disease states and mortality rates. And they have developed protocols to guide the optimal treatment of various conditions in resource-limited settings," says Dr. Horning.

His journey began with briefings at the Doctors Without Borders offices in New York City and Paris. When he reached Juba, the capital of Sudan, he was apprised of the needs at the refugee camp. "From there I took a prop plane. For much of the flight, we flew over the White Nile, which was beautiful," he says. They landed at the Yida refugee camp's dirt airstrip and Dr. Horning helped load medical supplies onto a truck. Then they went to the hospital compound, which was little more than a series of canvas tents.

"You're On Call tomorrow"

"Right away they orient you to the hospital," says Dr. Horning. "They said, 'You're on call tomorrow, here's the ward, here's how it works'." The lead doctor had been with Doctors Without Borders for two years. "He's in charge of the medical team and he did a lot to help me get on my feet," he says. "We shared all the inpatient care duties, including rounding in the hospital and every other day on call, in addition to seeing all complicated outpatient consultations." The most common conditions Dr. Horning treated were malnutrition, diarrhea, pneumonia and respiratory tract infections, and malaria. He says, "I was able to help and treat some very sick people with limited resources. I left feeling I had worked hard, and that I did my best to alleviate suffering and reduce preventable morbidity and mortality."

Working in a Community

"When I came back, it was easy to see how the experiences helped me grow," says Dr. Horning. "I think the big take-away for me was that here in Ashland, I'm in a community of neighbors, coworkers and friends. I'm accountable to my community. In Yida, everyone does the best they can to make a difference, but there is much less accountability. The refugees have little recourse if there is no clean water, no clean latrines, etc. If I think there's a public health issue in Ashland, I can work to improve it. But in a refugee camp, people are disempowered. There is no one to go to. Here, we have a culture that allows us to work for change if change is needed."

Dr. Horning loves living and working in Ashland, and he's excited that his wife joined him at Chequamegon Clinic in December. "We went to medical school together," he says, "and it's nice having her here in the clinic." They have a new baby, John, who was born in July. Dr. Horning's experiences in South Sudan, while challenging, have made him appreciate life in Ashland all the more. "I've struggled to make sense of my experience since I've gotten back,
he says. "I was doing what I could to help the people inside the camp, and I think we helped a number of people. But, I continue to struggle with the idea that sometimes, unintentionally, humanitarian aid can do as much or more harm than good... In Ashland, I am accountable to my community and my patients; and it feels good to be engaged locally, as a neighbor, as a citizen, and as a family doctor."