The Secret Life of Laundry

The team of employees responsible for St. Luke’s Laundry.

How keeping laundry in-house at St. Luke’s benefits economy and the environment

In 1978, disco was all the rage, Grease had just hit theatres and Julie Shober was starting her career at St. Luke’s. For the past 43 years, she’s been a linen attendant, faithfully folding and ironing laundry for patients who don’t even know she’s there. It’s not a glamorous position, but Julie loves her job.

“If I didn’t like it, I wouldn’t still be here,” she said with a smile as she folded fresh hospital gowns from a large bin.

Julie knows that what she does matters, and she’s happy to be part of a team that makes a difference. Committed employees like Julie are one of the reasons St. Luke’s still has an in-house laundry service.

Choosing to keep laundry in-house
“Doing our own laundry is pretty unique,” said Mike Boeselager, St. Luke’s Vice President of Support Services. “In fact, we’re one of only four healthcare systems in the state who’ve kept this service in-house.”

"We’re 1 of only 4 healthcare systems in
the state who’ve kept this service in-house.”

A few years ago, St. Luke’s considered following suit. “But after really looking into it, we realized we have two really great reasons to keep our laundry in house: our people and our planet," said Mike.

Conserving water and energy
Some of Duluth’s downtown area, including St. Luke’s Hospital, is heated by a centralized steam plant. Several years ago, St. Luke’s began capturing the used steam. “Normally, that wasted steam would just go down the sewer,” said Julie Spangenberg, St. Luke’s Hospitality Director. “But we found a way to collect it and use it in our laundry processes.” 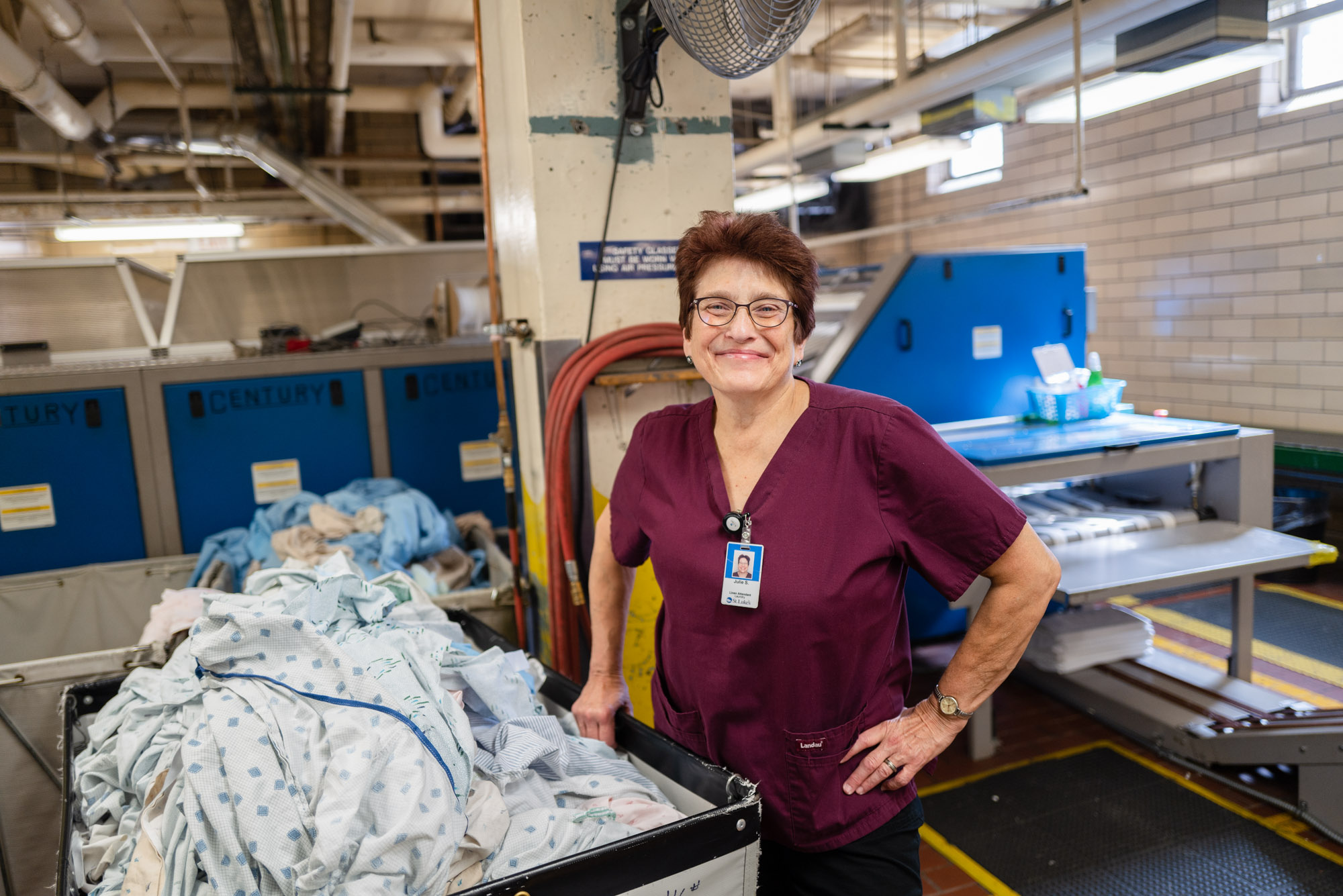 By doing this, St. Luke’s conserves a lot of water. “In the laundry industry, water conservation is a big focus,” explained Julie. “So, this was a really exciting thing for us. Especially in the winter, we’re pulling almost 100% of our water for laundry from this reclaimed steam.”

“We’re pulling almost 100% of our water for laundry
from this reclaimed steam.”

Since the water that comes from the steam is already hot, St. Luke’s is also conserving energy and saving the environment. Every year, 26 metric tons of carbon dioxide (CO2) emissions are avoided using this method. That’s equivalent to CO2 emissions of an average passenger car driving 64,000 miles or the charging of 3.1 million smartphones.

Keeping jobs local
Keeping laundry in-house also creates local jobs. “Instead of having people in Pine City or the Twin Cities doing the work, it stays in our community,” said Boeselager. “This sustains jobs that stimulate our economy.”

There are currently 17 people responsible for St. Luke’s laundry. Six are on the wash team, sorting and loading the washers; nine are linen attendants, folding and ironing; and two are linen porters, delivering the fresh laundry wherever it’s needed. On average, they process about 6,000 pounds of laundry every day. 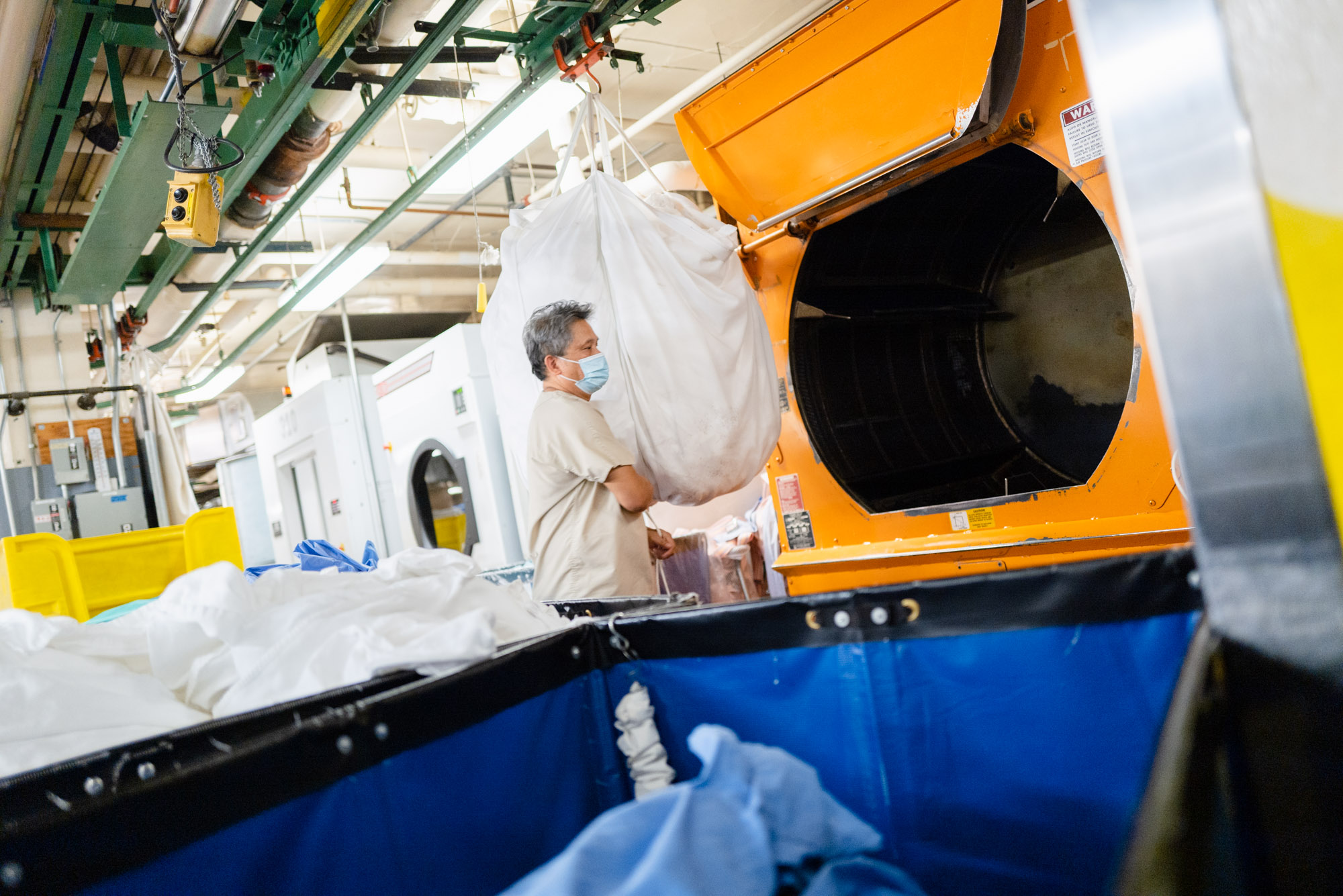 “We are so fortunate to have great people like Julie. The whole group is so engaged,” said Julie Spangenberg, St. Luke’s Hospitality Director. “They always want to know the patient census and how many pounds we’ve washed. I just can’t say enough about them. They’re fantastic.”

“We are so fortunate to have great people like Julie.
The whole group is so engaged.”

However, this group of people is more than just an efficient team of workers. They’re a strong community. “They’re like a family,” said Jessica Schroeder, St. Luke’s Hospitality Supervisor. “Many of them have known each other for decades. They care about each other and are always ready to help one another out. It’s a great culture to be a part of.”

This article was originally published in the 2022 October issue of the Woman Today.